It’s been 29 January to 4 February 2017. I wrapped up the last of the layout images late on Saturday evening so it was finally time to re-attack the intro again.

This entry is necessarily text heavy, but I’ve inserted some pictures of Australian animals to break the text up a bit.

At the start of the rewrite, I had two scenes to condense.

There was an opening scene in the desert where the two characters start apart from one another. Pointy has lost his car and is stumbling around blindly looking for it by clicking his immobiliser remote and listening for the “doot doot”. Pointy is literally blind because the sun really hurts his eye when he opens it for more than a fraction of a second. Meanwhile, Gronky has just finished burying Pointy’s car because that’s what he does (burying things). They eventually find one another (hence last week’s “doot doot” remark). Pointy ends up in shadow and can open his eyes again. He asks if Gronky can see a car. Gronky can’t see a car around anywhere. Pointy throws his keys away and asks how Pointy asks how to get out of the desert. Gronky buries Pointy’s keys and Pointy realises Gronky buries stuff. It’s implied that Gronky agrees to help Pointy because of what happens in the next scene.

The next scene was the original opening of “Robot”. Gronky is singing into his beatbox radio thing for fun and Pointy is impatiently asking how long it’ll take to get to the bus stop. Gronky is dancing around having fun in blissful ignorance of Pointy’s discomfort. Pointy is having trouble keeping up and gets blinded by the sun because he can’t manage to stay in Gronky’s shadow. Pointy finally puts his foot down and says either Gronky calms down and shows him to the bus stop in a sensible way or Gronky can dig up something for shade that he can take with him. Gronky considers a few options which he’s previously buried, decides on one of them and then pulls out his shovel.

Cut to the robot being dropped onto the desert floor. (Everything from this point on has been through layout.)

Here is a picture of a tammar wallaby for making it through those two giant walls of text.

I made little cuts here and there to things that didn’t matter. A big win came from changing the sequence of events to make certain actions overlap.

As originally written, Pointy sees which direction Gronky’s pointing in before he wanders over to bury the keys. From that the audience understands that Gronky is instrumental to Pointy getting to the bus stop, but they can see it’s not going to be straightforward.

I rewrote it so that when Pointy throws his keys away in frustration, Gronky instantly sets off to bury them and Pointy is blind again – Pointy doesn’t even get to see where Gronky is pointing anymore. But he still convinces Gronky to take him to the bus stop. Cue the second scene with them walking. Cue the robot dropping to the ground.

This was helpful (and much funnier) but I had a feeling I could take even more out of the story.

Here’s an unrelated picture of an owl getting a scratch on the head to give your eyes another rest.

Somehow I got to the idea that Gronky didn’t feel like being helpful. Instead of taking Pointy towards the bus stop, he points in a particular direction cheerfully and leaves Pointy to it. Pointy asks if Gronky can take him and instead, Gronky says no. Pointy is suddenly facing the prospect of blindly walking in a direction and hoping for the best. He loses his temper at Gronky’s lack of helpfulness and asks sarcastically if there’s anyone else who can show him to the bus stop. Gronky then is reminded of something.

Cut to the robot being dropped onto the desert floor.

With that, I’d managed to chop out the entire walking scene. Result! Cue Celebration Wombat!

But it still felt a little undercooked and not ready for thumbnailing yet. So I looked for some more comic opportunities and found them in the situation itself. It’s annoyingly difficult to convey them in text however because the simultaneity of it all makes it look like a complete jumble of activity.

In addition to asking Gronky the way to the bus stop, Pointy’s also trying to get back into Gronky’s shadow, except Gronky keeps moving out of the way because Pointy’s behaving strangely, almost turning the scene into a game of chasey. Pointy is also depending on Gronky to get him out of the desert, so he doesn’t want shout at him to bloody well stay still so he can get back into Gronky’s shadow to see which direction Gronky is pointing, and yet Gronky is not being co-operative at all.

With that extra bit of polish, I think I’ve got a scene. Hopefully that first scene plays out more funny than painfully irritating. 🙂

So I hope this little tale of rewriting and polish has been interesting! I want get started on thumbnails tomorrow before heading back to my dayjob on Monday where it promises to be an interesting but exhausting week. So hopefully tomorrow is nice and distraction-free. 🙂

Thanks again for reading! 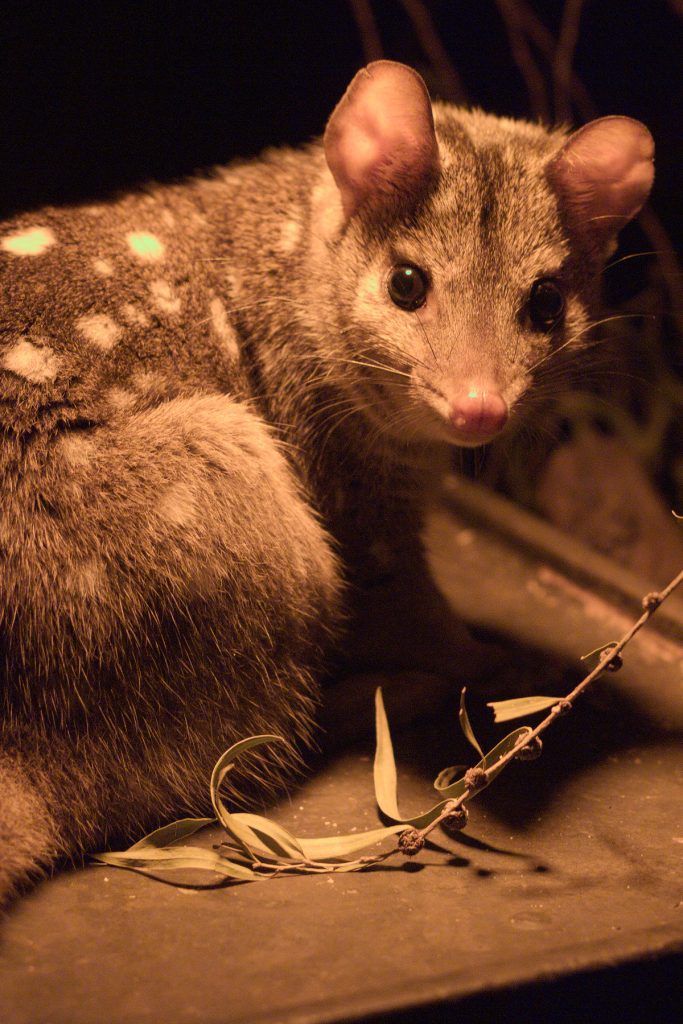 This is a chuditch or western quoll. His name’s Charlie and this photograph was taken on 7 July 2012 (four years and nearly two months ago). It’s one of the best photographs I’ve taken of him.

In captivity, a chuditch can live up to about five years. Charlie’s now way up there in quoll years and he’s definitely looking his age. He’s much more skinny and patchy-furred now, and sadly not as sociable.

Anyway, I’ve figured out how to rework the light in my old photos to more natural colours. Hope you enjoy seeing Charlie in part-colour. 🙂

The chuditch (from Noongar djoodidj) or western quoll is a predatory marsupial – a dasyurid. It is the only species of Australian quoll not currently on the threatened species list. The chuditch was originally found all the way across Australia but habitat loss and introduced predators have reduced its range to southwestern Australia.

Pretty much every photo or video I’ve ever taken of a chuditch has been at Perth Zoo in the nocturnal house. The enclosure is dimly lit in red, so the photos are processed to monochrome red.

This is not a quoll but it is an Australian predator. It is a barking owl getting a nice scratch on the head.

This is not a quoll but it is a marsupial. It’s a swamp wallaby too chill to pinch her dags.