Roughly by the middle of 27 November to 3 December 2016, the project had reached a crisis point. After a month of rewriting, tinkering and procrastination on “Sombrero” since Blender Conference 2016, progress had ground to a halt. I’d completely lost confidence that I could deliver “Sombrero” next year – injuries, stress from the office job and family-related stuff are already pain points in my life, and I didn’t want Pointy and Gronky standing in the same queue bringing me down.

After about twelve months of development, I’ve shelved “Sombrero”. 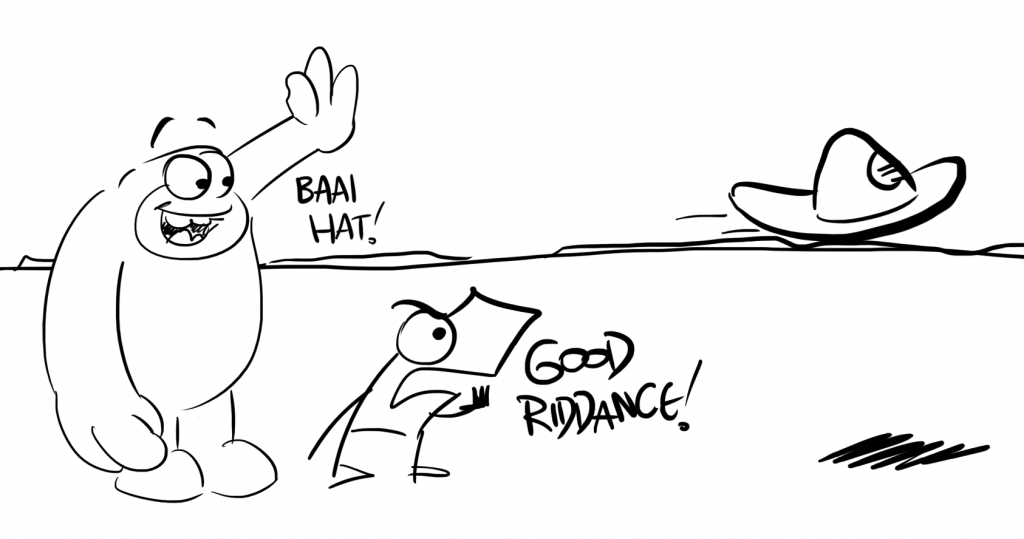 I rethought things with the new central notion that this project is meant to be a fun and fulfilling use of my spare time. and I want a movie to show for it next year. So on Wednesday I downscoped the project to tell a shorter, funner and funnier story.

There’s a lot of fun to work with already. Gronky and his playful antics are already fun. The consequences of Pointy’s characteristic lack of forethought should also be fun. But that bloody hat just wasn’t bringing the fun.

So now there’s a robot. It’s a very helpful robot – at least, it’s trying to be helpful…

The new story is much shorter. I’m retaining the characters as is and snatching up fun ideas from previous rewrites and generally avoiding the foul Gordian Knot of character motivation and story logic that comes with sustaining a longer film, so AMITS is back to being short and sweet and weird and funny, like it should be.