This week I started layout on the scene where we meet the robot for the first time.
There’s literally two more shots left in that scene to do layout for and I may even get to those later today. Hooray! I even managed to avoid doing a minor rewrite earlier this week after I spotted a conflict between staging and continuity. Hooray! 🙂

Once the robot intro scene is laid out, I’m going back to the opening scene that I started layout on at the end of December 2016. I was having trouble staying motivated so I halted layout work on the introduction and cut my teeth on the more fun scenes towards the end of the movie instead. It was a good move, because now every scene except the introduction is laid out (aside from those two shots but who’s counting?)

I like how “Robot” has come together – it’s anarchic and silly and quirky and fun. The “introductory” scene on the other hand has a few too many problems to ignore:

When I wrote it back in December, I was trying to give the story a concise introduction to keep the running time down. However, mere conciseness isn’t enough! A lean introduction is great, but not if it misses setting the right tone, meeting the characters and their situation properly while keeping the tone funny and sweet and a little bit quirky. There’s only one thing to do.

There’s another good reason to rewrite the introduction but it takes longer to explain:

I got notes at Blender Conference 2016 about “Sombrero” (thanks Colin!) about how Pointy’s problem was repeatedly being solved then unsolved to create another problem. It made the pacing very stop-start. In “Robot”, the only time Pointy’s problem gets solved with any certainty is at the end. To do that, any solutions to Pointy’s problems have to be an obvious, unacceptable compromise upfront. That compromise isn’t obvious in the intro at all, and to make it adequately obvious I have to shift the focus of the scene dramatically. Frankly, the scene isn’t that amazing that I feel a need to salvage it in its entirety. More than anything, the start of the story wants a re-think.

And it’s already begun to get one! I mentioned last week that I started thumbnailing a new introduction. I’m going to develop that as the new opener, if for no other reason than I think it’ll be cute when Gronky imitates a car immobiliser, much to Pointy’s confusion.

You’ll see. Catch you next week!

It’s been 15 to 21 January 2017. This week I started and finished layout work on the chase sequence where Pointy gets chased away by the helper robot. AMITS has never had an action sequence before and it was really good fun to draw.

I’m working much smarter with layout this time. Here’s some workflow changes I’ve made to get through more work quicker:

Like I said a few weeks ago, I push the ideas and expressions in layout hard, sometimes harder than the 3D can cope with. I don’t have a rig yet to capture the utter anarchy of Pointy’s “pose” in this layout drawing, but I have a few ideas. 🙂

I also started sketching out an introductory scene where we see what Pointy and Gronky are doing before they meet up. I don’t know if I’ll actually use it in the finished film, but it’s a fun little bit and worth recording in some form before I forget I even dreamt it up.

I mentioned a couple of blogs ago that the day job was promising to be much more intense this year. It’s turned out worse than I anticipated at least in the short term.

For the sake of controlling my own stress levels, I’m not going to hold myself to the October 2017 target date I mentioned at Blender Conference 2016. The scope and difficulty of “Robot” should mean it’s ready late this year, but if I badly need downtime, the movie will just have to wait for me to collect my wits again and get back to work.

The severity of the situation is a little new so I don’t have any further insights as to how it’ll play out. I’ll keep you posted on how I’m doing, and I’ll keep beavering away on my little cartoon whenever I can.

It’s been 8 to 14 January 2017. (How many times have you got the year wrong so far? My grandmother gets the actual century wrong, bless her.)

I had to squeeze my layout work around a family event on Sunday, but I did get another scene finished. I spent the rest of the week on miscellaneous things like catching up on unwatched animated movies and getting my sleep schedule back to something sensible. (Sleeping right during the week means having less sleep to catch up on during the weekend – and hence more production time!)

I finally started reading “Elemental Magic”, the standard texts on effects animation by industry veteran Joseph Gilland. The first Elemental Magic book is more “philosophy and approach” while the second is more practical instruction. Despite speaking from the perspective of hand-drawn animation, the author more than touches on CG. Simulations (like hand drawn) should fit a particular look and feel, even when it’s a particle system and mesher responsible for putting something on screen instead of an animator’s pencil. It’s great to get a sense of how an animation veteran observes and approaches their work and “Elemental Magic” is chock full of insight.

I’m reading up on effects animation because there’s smoke and fire in AMITS: Robot. I’m not sure whether to go hand-drawn, wrestle with simulation or even adapt the metaball particle based smoke from AMITS: Sombrero – but whatever strikes the right balance between ease, speed, quality and art direction is what will get the movie made. Also it’ll make my layout more meaningful if I can draw smoke and fire more convincingly. 🙂

See you next week!

On Sunday, I finished up a whole scene full of layout images and they’re looking pretty good. It’s the last full scene of the film and it’s looking pretty fun. There’s more of a silly beat at the end now. This is nice to have because without it the movie just kind of ends.

The day job is promising to be much more intense this year than last year. It could be that I just use Sundays and public holidays to create Gronky and Pointy’s first outing and reserve weeknights for keeping myself sane. Or maybe it won’t be that bad. Or maybe it’ll be worse. Who knows! Either way, slotting in movie-making alongside a full-time day job is part of this long journey so I’ll keep you posted! 🙂

It would be nice to say I’ve been hard at work on my week off from the day job, but I’m having a quick gaming break instead. I’m really happy that Blender doesn’t crash as often as Fallout 4 does otherwise I’d probably give up on 3D animation altogether. So frustrating!

The layout images serve multiple purposes – they make my pitchamatic and story reel much clearer, and once I start rough animation I use them for a blocking and staging reference. They’re almost key pose drawings, but not quite…

But this is 3D animation! you may wonder. Why not go straight to 3D and skip all the drawings nobody will see?

For one, the right expression is much quicker and easier for me to find with line drawing, whereas 3D character animation is an ongoing battle against the character rig’s limitations. A good character drawing is a tangible visual idea which gives that battle a focus and an aim. With that tangible idea in front of me, I can concentrate on the task of bringing the character to life; without the tangible idea, there’s potentially too much for me to invent out of thin air.

In short, experience has taught me I’m happier and more productive when I’ve figured out what I’ll be doing before I open up Blender, and layout drawings are a key part of that planning process. Also, funny drawings are more interesting to look at than words on a page. 🙂

This week I also experimented with Blender’s new micro-displacement feature for the desert ground cover. It shows some promise but I feel like I’ll end up using a mixed solution with procedural shading and geometry, especially in the foreground. Here’s a sneak peek at the ground cover in progress. 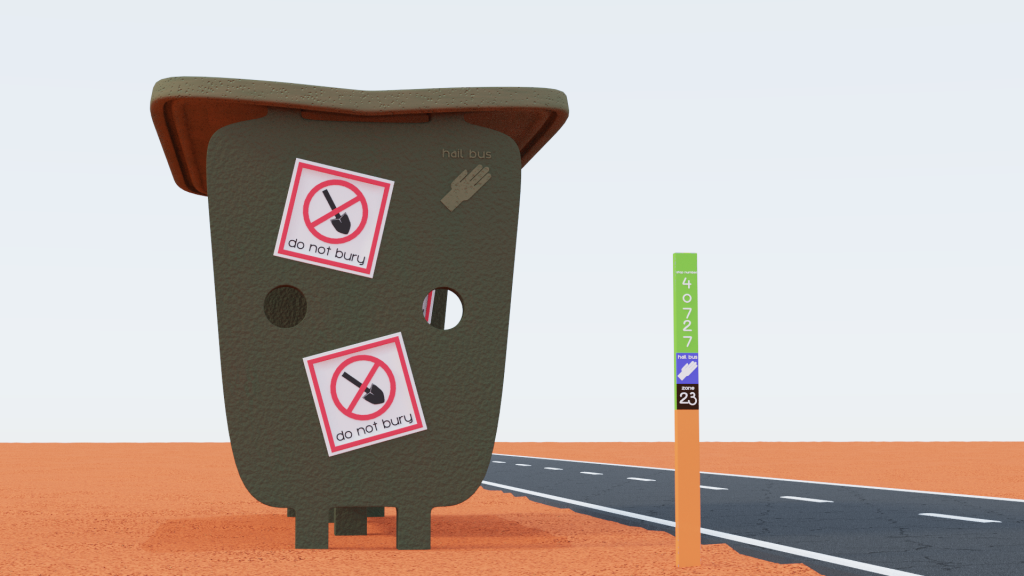 That’s about it for this year. Here’s to a tolerable 2017, hopefully made actually nicer by me finishing an actual movie for people to watch.

Now, back to hiding from Super Mutants and wishing I’d put more points into melee..