I got an Expert Sleepers Disting Mk 4 module on Friday. It is Eurorack’s designated swiss army chainsaw. Amongst its 76 modes, it can be a vocoder. I took it for a spin with a John Cage lecture as the modulator signal on Friday evening and the above is what came out.

A bank of band-pass filters cut each signal into strips of frequency (think bass and treble, but much more precise). The vocoder tracks how loud the modulator signal is at each strip, then adjusts the volume of the carrier’s strips to follow the modulator’s strips. The carrier’s strips are combined back together as a whole signal and out comes Cylons.

One of the challenges with vocoders is getting output that’s as intelligible as the input. The intelligibility of the Mk 4’s vocoder was not great, so I mixed in a filtered version of the original speech. The filter is tuned to sibilant sounds (like s, f and th) which were getting lost in the vocoder process. It’s an old trick – the EMS Vocoder used for the Cylons has a cleverer version which lets sibilance through as it’s required – but a dumb version works in a pinch and as a result you can understand Mr Cage just fine.

For further fun, I’m modulating the pitch of the carrier signal with a random signal. This makes Mr Cage sound much more floaty than usual as the carrier floats up and down in pitch, giving him a rather more vague delivery.

Have some sound art.

The original sample is a snatch of the Mercury Theater’s infamous “War of the Worlds” broadcast, looped to twist its meaning. The chief glitch mangler effect here is a PT2399 digital delay chip living inside the Befaco Crush Delay v2. Its delay length is being automatically modulated by four stacked modulation sources – two random, two cyclic – via a Befaco A*B+C attenuverter/offsetter. The strength & offset of the delay modulation and feedback strength of the delay were manually manipulated during the recording.

DASYRAC is my voltage-controlled Eurorack modular synthesiser. It’s a synthesiser because it creates positive and negative voltages which turn into vaguely musical positive and negative sound waves when they’re sent through a speaker coil. It’s modular because it’s built up from modules and instruments which each have a specific role to perform in the process of synthesis. It’s Eurorack because the modules use Doepfer’s Eurorack specfications for size (3U) and voltage (+/- 12V & +5V supply rails, plus gate and pitch CV buses which only Doepfer’s modules seem to use).

Finally, it’s voltage-controlled because the modules are connected by patch cable and signal one another using voltages. Signal types include:

Because they’re all made of the same stuff (flowing electrons), these signals can play one another’s roles – audio and gate signals can both be a modulation source, sufficiently fast clocks can be an audio source, audio can also be a clock source, pitch can be a modulation source, modulation can be a pitch source, and triggers can even be an audio source as long as you’re into snaps and clicks. Part of the fun of modular synthesisers is just seeing what happens when you connect modules together in unconventional ways.

Here’s a recent photo of a cable-free DASYRAC with colour-coding to show what the different modules do. If a module has more than one function, it gets more than one colour.

The multicoloured thing at the bottom left is a Make Noise 0-Coast synthesiser – it’s not a Eurorack module itself, but it can patch into and out of DASYRAC just fine. As you can see, it’s like a tiny self-contained modular system in and of itself. There’s also an ARP Odyssey floating around somewhere.

The green modules are audio sources. They speficially create oscillating voltages which are intended to be heard aloud at some point. Some are more fully featured than others – the green module in the centre top row is an entire self-contained instrument – it’s a recreation of the clap sound from a Roland TR-909. Audio sources which produce a musical tone – oscillators – have a 1V/Oct socket which takes a pitch voltage. The green module at the top left is a sound playback instrument.

The blue modules are “non-audio” voltage sources and include function generators like the Rampage, step sequencers like the SQ-1, procedural sequencers and clock sources like Tuesday, and random voltage generators like Turing Machine. Their job is to provide discrete or continuous voltages which can drive melodies, rhythms, filters, or whatever else accepts voltage control. If they’re running fast enough, voltage sources can also be used as oscillators in their own right.

If the voltage sources put out voltages which aren’t quite right, that’s where the orange modules come into play. These modules are for manipulating voltages in different ways.

The yellow modules are the effects and filters. Filters in particular make the incoming sound quieter at particular frequencies and also colour the sound in characteristic and desirable ways. They are “voltage controlled filters” (VCFs) because they take an input voltage to control their cutoff frequency, which is the frequency where the filters take effect. There’s also some effects modules for even more retro colour. Many of these modules can be made to create noises of their own without any input,  which also makes them audio sources in their own right! 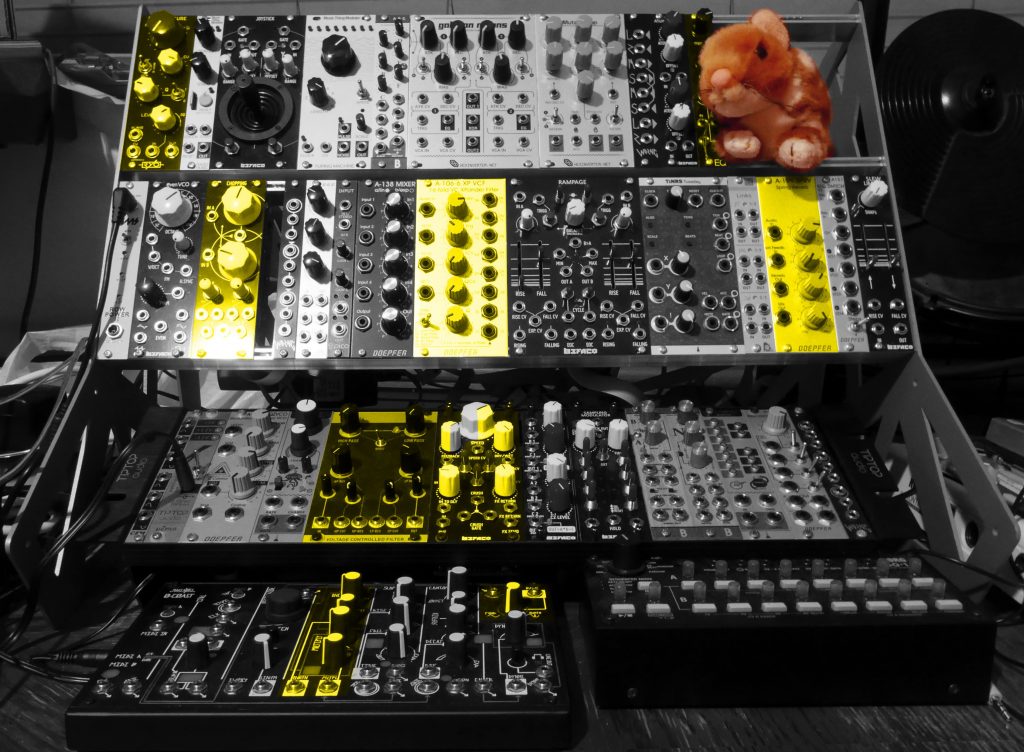 Violet modules are a special thing called VCAs – voltage controlled amplifiers/attenuators. A VCA takes two signals – an input and a modulating signal – and outputs a quieter/louder version of the input signal with amplitude/volume tracking the modulating signal. VCAs are where a long steady beeeeep sound is contoured into a short pip or a long mournful wail. Even better: a quadrature VCA can invert the incoming signal – chuck a sine wave into it as a modulator and you’ve got Dalek voices.

The last set of modules in indigo is for combining signals together. The modules can mix audio as well as control voltages.

If you want to hear the sounds I’ve been making with it lately, check out my SoundCloud.

It’s been 23 to 29 July 2017. I’ve got a week of leave booked for the week coming during a lull in the big day job project – and it looks like the weather will be nice and clear! Yay!

I made some progress on Shot 3 of AAAAAAAAAAAAAA last week – I modelled and rigged a cactus, and I got started making a bird. I’m aiming to finish off Shot 3 in the next couple of days by modelling, rigging and texturing the bird then animating and rendering it all  After that, I can start thinking about Shot 4 and maybe even do some preliminary sound mix between tossing around scene ideas.

In bleepier news, my modular synthesiser (DASYRAC) is nearly out of capacity. Both of the power supplies are getting close to their limits, and the physical racks are so full of modules that I’ll be pulling older/redundant modules out to make room for more useful ones. There’s a lot of sourcing parts, waiting for postal services and soldering in my future, but it’s nice that I’m hitting a natural stopping point.

Thing is, I haven’t really talked very much about DASYRAC or the whole modular synthesiser bit in this blog aside from mentioning dead op amps and soldering burns from time to time. It’s a huge thread of my creative efforts that’s been all but invisible here, and that’s a bit weird because I’ve spent way more time creating voltages than pixels lately. There’s really no good reason not to mix it up a bit in the blog too.

That said, modular synthesisers are esoteric little beasts that take a fair bit of introducing to the layperson. It’s probably worth doing a blog entry about all by itself..