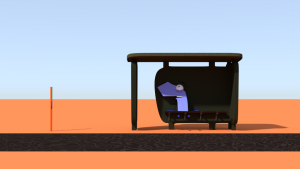 This week, the day job struck hard – I pulled a 16 ½ hour day on Wednesday and the second half of the week wasn’t much good for anything except catching up on sleep. That should be the last of it for a while though.

Moviewise, I’ve been doing more tinkering. The beginning of the movie feels flat and it takes too long to give the audience what they need to know. So I’m looking for a way to set up the premise which is quicker and funnier and more engaging than what I’ve already got. It’s rough ideas and thumbnails for now. And I’m about to narrate the pitchamatic for the rock sequence shortly after I post this.

Meanwhile, Blender 2.78 is coming out soon (release candidates are available) and there’s two new features that I’m really looking forward to having in a stable version: bendy bones (already being used for Pointy’s eyebrow) and microdisplacement. Jason Schleifer at Nimble Collective has done a walkthrough of setting up bendy bones and Midge Sinnaeve posted a video of the microdisplacement workflow. (Grease Pencil v2 is going to be another killer feature for 2.78 – Daniel Martinez Lara is doing mini-tutorials about it.) 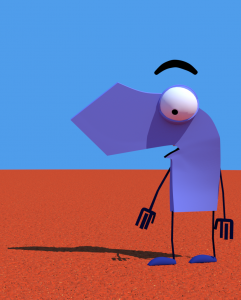 I’ve been looking at using microdisplacement for the desert pavement. This week’s images are example renders: the first image (Pointy going ooh!) uses microdisplacement and the bottom image uses displacement via a bump map (Pointy scowling). In the microdisplaced version, the edge of the shadow is broken up. This is what you’d expect to see if a shadow was falling across rough ground. In the bump mapped version, Pointy’s shadow is straight at the edges instead of broken up and so the ground registers as a patterned flat surface. Not what I want at all.

So hooray for microdisplacement, thanks again for stopping by and I’ll see you next week! 🙂

Remember last week when I said I was ready to jump into 3D layout again? Turns out that was wishful thinking. There’s a step between pitchamatic and 3D layout which I thought I might skip for expediency’s sake, but it turns out
I don’t want to skip it after all.

That step is the 2D animatic, also known as the story reel or the Leica reel. It’s where the movie starts to get timed out. In the workflow I’m using (borrowed from the Blender Institute), the file which begins as the 2D animatic eventually gets filled up with more and more complete footage until finally the movie is all done. That file, masteredit.blend, now exists. Woo!

To kick that off, I made a spreadsheet for the shots and another spreadsheet for lines of dialogue, based almost entirely on what was in the pitchamatic. I reference the relevant storyboard but the shots have all new shiny names now based on a scene, a camera setup (shot) and which instance of that camera setup I’m up to. If I’m using camera setup 2 for the third time in scene 1, that makes it shot 01_02_C. These will go on to become parts of filenames when I start moving 3D assets around.

Since I already had storyboards and most of the dialogue from the pitchamatic, it took me a single day to rework the pitchamatic file to cobble the animatic together.
Compared to building the animatic from nothing over a couple of weeks, this was much nicer!

The rough running length is
about 3:40. It is no longer the monster seven minute animatic I was facing down a year ago. I
almost cried with relief, truly.

Over the course of the week I’ve been reviewing the animatic to figure out what’s missing, what isn’t timed right, what doesn’t work as well as it could… that sort of thing.
The animatic has shot names attached to markers to make reviewing easier.

And here’s how that works – set Metadata to stamp output, tick Marker..

…then put markers in your timeline. M places a marker, select and Ctrl-M renames it, G while selected moves it back and forth. Noice!

The intercostal strain makes it uncomfortable to sit in a chair for too long (especially after sitting in a chair all day at my dayjob), so I’ve been doing most of the review work from bed. Nevertheless, I have a to-do list! Much of it involves audio work.

This has also been a week for switching technologies. I’ve switched from Bittorrent Sync over to Subversion to synchronise the movie’s file repository across multiple computers. There’s also an ugly but functional Subversion client for Android which lets me export single files to phones and tablets if I want to have the latest animatic in my pocket.

And after Tumblr advertised discount toilet paper at me I’m checking out WordPress. The dream is to host all the things on quollism.com, ad-free, but still allow people to participate.

That’s all for now. Thanks for reading!

Over the previous week I’ve been doing the last of the blocking for my 11 Second Club entry and I’ve begun splining. This week’s video is a work in progress.

In case you don’t know animation lingo: think of blocking as creating individual important moments in the animation; splining is the process of getting the computer to join those moments together.. then hating the computer for how poorly it does it.

For splining, I’m going shot to shot, bone to bone and setting the dots to interpolate using Bezier (smooth in/out) with Auto-Clamped movement. From there, I slide keys around in the Dope Sheet to get it looking about right. Then once the Dope Sheet work is as good as it can be, it’s off to the F-Curves Editor to make motion tweaks channel by channel.

Blender has a handy tool called the breakdowner. I use it to make extra keys for ease-in, ease out, anticipation and overshoot.

Basically the breakdowner is an awesome tool.

Of all the twelve principles this week, staging is the one I’ve learnt the most about. I sat down to study specifically poppy snappy styles of animation and ended up learning about character blocking. And being reminded why I liked Kaeloo so much.

(motion analysis from the Kaeloo episde “Hide and Hunt”)

Also I decided that straight lines are probably funnier than arcs. Probably.

That’s all for now. Have a good weekend!

This is too nifty to wait for an end of week post. 🙂

I was messing around with Blender’s vector blur node. I found out if you separate the Speed pass and zero the last two parameters before connecting it to Vector Blur, you can confine the direction of the blur to a trail. This gives you a nice crisp leading edge and a blurry trailing edge, just like the old cartoon days. 🙂

It doesn’t work super-well on shaded objects but it works pretty great on shadeless ones (YouTube video).