Here’s some expanded notes on the soft body sim in Blender. I’ve figured out what I think are the basics. I think. Theoretically. Let’s use Mr Jelly Belly as an example mesh.

The goal is to create a soft body sim that procedurally jiggles Mr Jelly Belly’s soft parts around without requiring hand-keyed animation. The soft body dynamics simulation is mainly an interplay between introduced energy, stiffness/springiness and damping (more correctly dampening but whatever).

When the vertices of the mesh are set in motion (through object translation, shape keys on keyframes, armature-based deformation, certain force fields), energy is introduced – soft body simulation treats vertices like a system of physical particles linked by edges and faces. The stiffness/springiness of the vertices, edges and faces determine how much that energy affects the position of the vertices, and factors like damp(en)ing determine how quickly energy is lost from the system. Once energy stops entering the mesh, the verts will try to get rid of the rest of the energy and return to equilibrium (motionlessness).

First off, for the love of kittens and puppies, open up Soft Body Cache and change the Cache Step option from 10 to 1. (1 should really be the default.) [EDIT: It is the default now. Hurrah!] 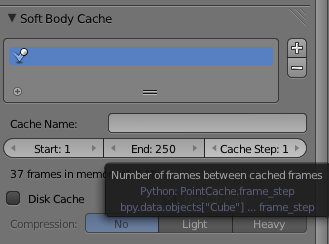 So, first let’s look at the top panel, labelled just Soft Body. Here we have:

Think of the mass vertex group this way – how much mass is pressing against the vert from the inside of the mesh? How much force is that vert holding back? In the case of Mr Jelly Belly, there’s a lot more mass affecting the underside and sides of the belly than the top of the belly – the weight has sunk into place. Essentially, it’s a gravity thing.

We want Mr Jelly Belly’s spare tyre to be heavier on the bottom so it jiggles more slowly than the top. This is the mass map for Mr Jelly Belly: 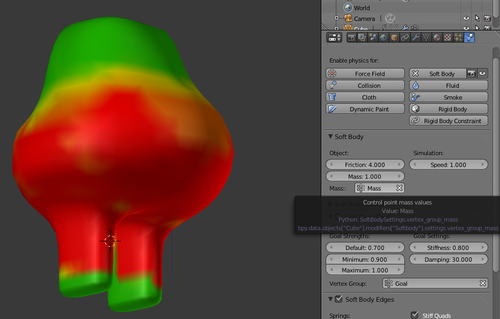 Skipping Soft Body Cache (we’ll come back to it), we come to Soft Body Goal. This is where you control how much the verts attempt to keep the position they hold before the soft body simulation takes effect. This is untickable. Here’s why:

Parameters in this section are:

Since we want the belly to wobble around a lot once it gets going but for other parts of the body (like the legs and chest) not to be too affected, this is the goal map (min 0.9, max 1.0). This map lets the belly wobble around as freely as possible in the sim while keeping the red areas where we left them pre-sim. 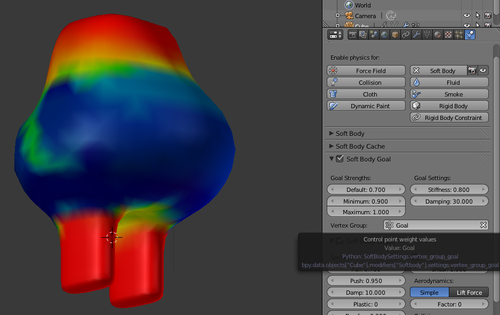 Soft Body Edges, the last panel we’ll deal with in this intro, is all about setting internal forces. (There’s also Soft Body Self Collision, Soft Body Solver and Soft Body Field Weights, but I didn’t touch them.)

Soft Body Edges is truly where it’s at. I can’t think of any situation in which you’d actually untick it because if you do, things tend to fall in a heap. This is because Soft Body Edges is where you set up the internal tensions of your mesh acting through its edges and quad faces:

Since we want the belly to be pretty springy and mobile, it gets a low spring value in the Spring map. Other parts of the mesh should be relatively stiff. This is the spring map I weightpainted for Mr Jelly Belly: 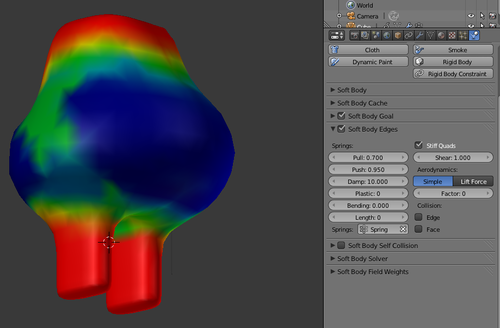 Soft Body Solver contains the very useful Min Steps parameter which controls the minimum granularity of Blender’s simulation. If the simulation appears to be doing stupid stuff like making certain verts stick and then suddenly fly all over the place like a wasp on crack, try cranking this number up a bit.

So, back to that Bending parameter in the Soft Body Edges panel.

Let’s say you’re playing with dynamics. Let’s say you’ve got a complex shape like our good friend Suzanne. Let’s say you’re blasting that complex shape with a very powerful Wind force field, and let’s say Suzanne’s eyebrows are periodically disappearing into her forehead. By cranking up the Bending parameter to 2 or 3, you increase the stiffness across longer links than just adjacent verts. Suzanne’s eyebrows find it harder to bend back because of this distributed stiffness. Basically it’s a way to say “Get the mesh to hold its shapes as they are”.

Dealing with self-intersection this way is preferable to the alternative, namely ticking the Edge or Face boxes in Soft Body Edges, then turning on Soft Body Self Collision and burning enough CPU to fuel a small country.

Anyway. Whenever you play the scene’s animation from scratch, the soft body re-simulates. You can tell it not to simulate until render time by unticking the eye icon next to the “Soft Body” button.

Soft body dynamics can also be placed over the top of meshes being deformed with armatures.

If any given vertex is allowed some simulation, it’s possible for the armature-driven movement to lag severely or even be ignored entirely if the stiffness in Soft Body Goal is set too low.

I wouldn’t call that everything I know about soft body dynamics in Blender, but at least now we have a procedurally animated hypnotic jiggling purple arse to contemplate:

“Smile, Darn Ya, Smile” isn’t the very first Merrie Melodies cartoon (that honour belongs to “Sinkin’ In The Bathtub”) but it’s one that I’ve had echoing around in my head a lot lately. Mainly the bass clarinet melody timed to the cow chewing. At least I think it’s a bass clarinet…

A lot of the early WB black-and-whites were pretty much the music videos of their era – Warner Brothers specifically wanted the shorts for promoting their back catalogue so people would buy the sheet music. Into colour and beyond, even as far along as Tiny Toon Adventures, WB’s cartoon composers would continue quoting these pieces in their soundtracks. They’re great tunes and they still sound great today.

The animation style isn’t as crude as say the Felix the Cat shorts of the early 1920s but it would be a few years before Walt Disney started pushing the techniques of animation towards fine art (see the twelve principles, or even just read The Illusion of Life). Stylised “rubber hose” motion was still AOK – it seems to be a lost art these days after over 70 years of higher artistry prevailing. (I wonder if it can be done using 3D-based CG…)

Anyway, I’m definitely up for rubber hose animation that bounces along to a swung 2/4 beat with a sense of playful mischief. It’s properly uplifting stuff made for seriously downtrodden times, even if sometimes the casual racial caricatures are a bit cringeworthy. (Witness Harman-Ising’s original Bosko demo to WB where a newly-drawn Bosko jokes about being “just out of the pen”. Ouch.)

“Smile, Darn Ya, Smile” is available in restored form as part of the Looney Tunes Golden Collection box set (Volume 6, Disc 3) along with other old black-and-white cartoons from the 1930s.