My new year’s resolution for 2013 was to get serious about learning computer animation. I’d already messed around in Blender for a couple of years after Sintel came out in 2010. I’d spent many hours absorbing the wisdom of Blender Cookie, Blender Guru and others. After spending nearly 20 years with music, writing and cartooning as my creative outlets, animation was my next thing. It was a natural progression which would make use of my technical mind and my creative mind. It wasn’t that I wanted to become a professional filmmaker necessarily – it was simply time to give animation an honest try and see what I could come up with.

I started with little animation studies…

…but once I tried to push beyond simple silliness, I found it really hard without a working knowledge of anatomy. For reasons best known to 2013, I decided I should make a film to make learning all this stuff more interesting. All the cool stuff I could learn!

(My advice for anyone in this position would be to at least get stuck into 11 Second Club first. Then make a film.)

So I read up on anatomy, screenwriting, composition, music for animation, figure drawing and storyboarding; I did tutorials on colour theory, compositing and rigging; I watched hours and hours of old cartoons for inspiration. The knowledge gap between me and my ambitions was far larger than I expected, but I pottered on still looking for that story.

One idea, The Quiet One, was particularly promising. It was a sprawling sci-fi epic about an herder-nomad prodigy who travels to a world of high-tech entrepreneurs to save his people from the invaders colonising their land and stealing their water. The world was appealing but I could never pin down a plot that I liked. I developed it between September 2013 and March 2014 but it ended up fizzling – it was just too big and amorphous and ambitious for one person to make a movie out of.

It wasn’t until 30 April 2014 that I hit upon the idea of a small character harassing a larger character from within their shadow about the larger character blocking out the sun. The idiocy of the situation appealed to me.

Moments in the sun

I spent the next two years creating the characters and sussing out workflows for making films while kicking various story ideas back and forth. Many iterations were thrown on the scrap heap – not just ideas here and there but entire versions of the story. 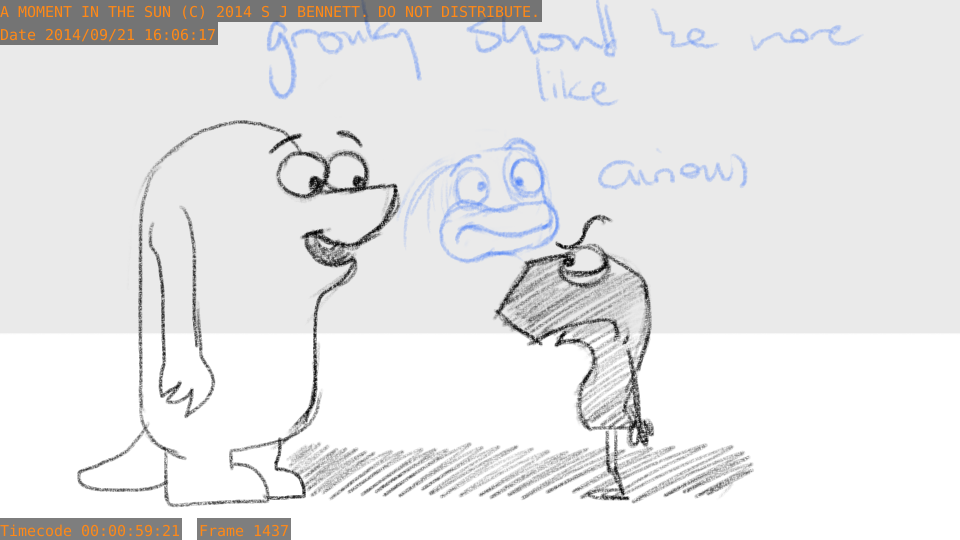 ….to “sleazy entrepreneur accosts naive rube about leasing his shadow out for money” (from February 2015)… 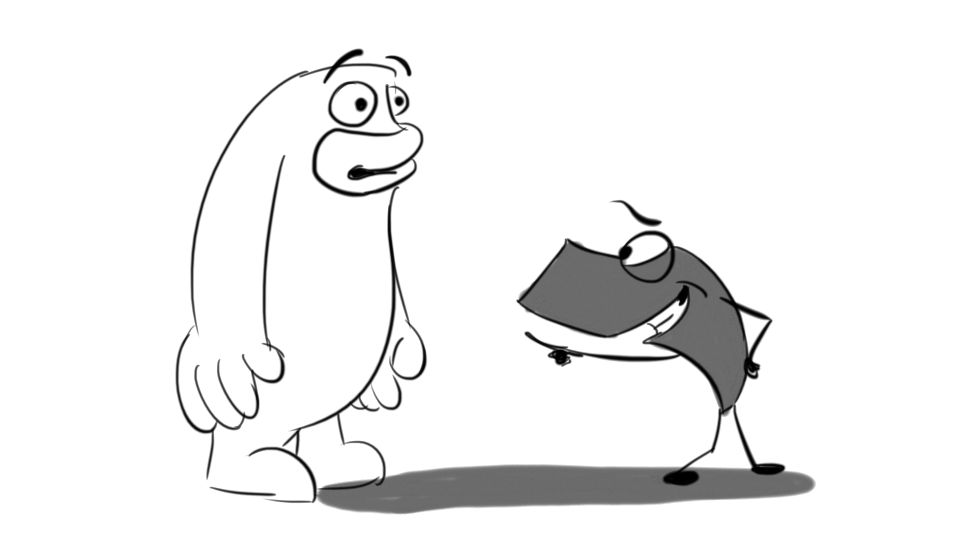 …to the simpler gadget comedy it is now: “playful desert giant finds a hat for irritable photosensitive person then inadvertently irritates them even more” (March 2016 onward).

There’s kind of a continuity from version to version but it’s necessarily come a long way from the original idea. What I started with wasn’t a good basis for a laugh-out-loud cartoon in the first place, not that I was to know that. But it did get me started.

If you want to read the whole story as it happened, you can check out my weekly production reports on Tumblr. It’s mostly there.

At the time of writing (7 May 2016), I’m working on a 2D animatic – still images over a temporary soundtrack with just enough music and sound. This is mainly to work out timing. From there I’ll animate, light, render and composite all 70-odd shots, then finalise the dialogue, music and sound effects. Once that’s done, I edit it all together and see how I feel about it. I’m led to believe shame and discomfort will be one of those feelings but I hope a little pride will be in there somewhere too.

I’ve also taken enough notes about the process of making this bloody thing to write a pretty solid book about it too. I’m anticipating something less like an expert’s guide and more like a list of things not to do with reasons why not.