I drew another 36 storyboard images this week. I have 11 thumbnails left to turn into storyboards before I can start narrating over the top of it and creating a pitchamatic to see how it plays out. Maybe 15 storyboard images or so. I also recheck the shot and framing decisions to make sure they still work. I’ve cut a couple of shots, re-framed others and introduced a new shot. 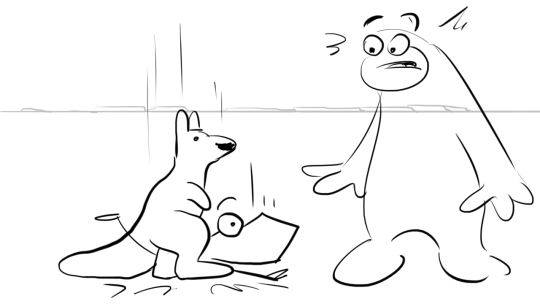 I’m using square-on framing to keep the cinematography simple and deadpan to complement the silliness of the characters. It feels like I’m framing the action from the desert’s point of view – observant but impassive.

I also find myself taking the characters way off model in boards because it gives me a nice expressive target to shoot for once I start working with the CG versions. I really like this one of Gronky, for instance.

Thanks for reading, see you again next week!