After another session of storyboarding, I’ve finished the storyboards for the new scene which I am calling Scene 3-A. In the old version of the story, Pointy walks away from Gronky to try to lose radio contact between Gronky’s remote and the speaker in the hat. In the new one, he tries to smash the speaker with a rock instead. (See how much quicker that is to explain, even in words?)

With the first pass of drawings done, I’m now in the pitch-and-polish phase. I run people through the story, I get their reactions, and mostly I see what doesn’t work much more clearly because I’m putting it in front of someone else. Then I fix the issues, find someone else to show the scene to and off I go again until I’m happy with it. 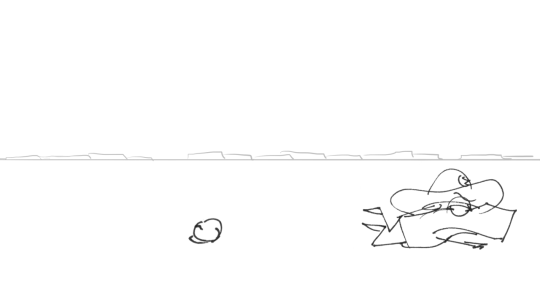 I pitched the scene to one of my workmates. He laughed which was very nice of him. There was one shot though where Pointy lobs the rock into the air and takes a flying headbutt to try to get the rock to hit the speaker. (He misses.) After Pointy fell down, the rock fell a long way away and it felt kind of artificial. Something so unexpected gets the audience thinking ‘how the hell did that happen?’. For a quickfire bit of physical comedy, this curiosity is utter poison. Also it’s a bit dull. Definitely room for more fun there.

Obviously the rock needed to land closer. But not on top of the hat. So I fixed it so that Pointy gets his feet mixed up trying to position himself under the rock. He trips over, falls on his face and the rock hits Pointy on the bum instead. Close, but no cigar – and Pointy gets a sore bum for his trouble. And hopefully more fun for the audience all-round.

Thanks for dropping by again and I’ll see you next week!