It’s been 30 October to 6 November 2016. I returned from Amsterdam very early Friday morning and the jetlag is epic. This week’s post is about the notes I got from people at Blender Conference and what came afterwards.

I put the movie in front of many people over the four day span of the conference, including Jason Schleifer from Nimble Collective (first picture), the director of “Alike”, Daniel Martínez Lara (second picture) and Colin Levy. It was as much an education in how to give notes for a film as it was an opportunity to hear what people thought of my little story. My “lightning talk” during the conference’s Open Stage went very well. I invited people to grab me if they wanted to see my little film and give me notes. Although nobody came looking for me, people knew who I was when I introduced myself at the bar so it was definitely worth doing! 🙂

By Monday evening, I had twelve hand-written pages of valuable encouragement, critique and confusion from the various review sessions. I made sure it wasn’t just a list of problems to fix but also the stuff I was doing right. I don’t want to break what’s working – not again. 🙂

People liked the fun and the weirdness and silliness of it. They also went along with the steppy animation style of the block-out.
Some notes got more interesting the more I thought about them. One of the notes from Colin Levy said that the pacing and beats made it feel like three episodes instead of a single story. Another note about Pointy from Jason Schleifer (Nimble Collective) even made me think “this isn’t what I want for this character at all”. But I got many notes about the over-long running time and the characters being a little mysterious, Gronky in particular. 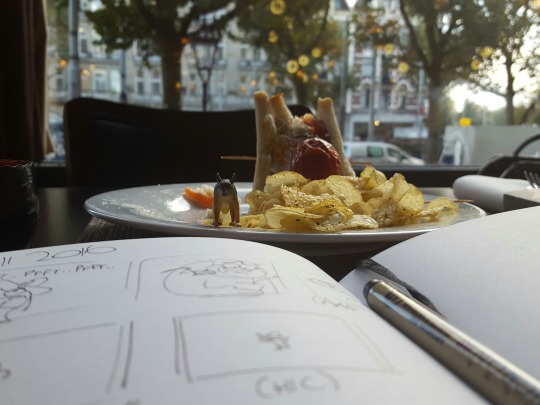 The day after the conference, I wrote a new outline which answered the notes and I did twenty pages of thumbnails the day I left for home. Of the 149 thumbnail images, about a third of them are reused from the current edit. A good chunk of the remaining 100 images use existing same camera angles with slightly different action on the same narrative beat.

I’m taking this week off from the day job to shake off the jetlag from the trip and rest up. I’d also like to have a flatmatic by the time I’m back at the day job. This week I can go full-time film maker – drawing storyboards, recording pitch narration and dialogue, working back towards a revised rough 3D version. A week should be more than enough time to get a big chunk of that done once I recover from the jetlag.

Next Saturday, you’ll be able to see how well-founded this optimism turned out to be. See you then! 🙂 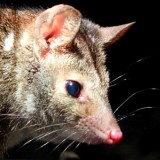